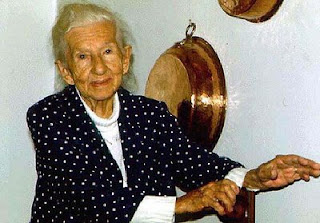 A reporter asked the brazilian poet Cora Coralina what is to live well. She replied:I'm not afraid of the years and I don't think about aging. And I'll tell you, don't think about it. You should never say you're aging, you're getting old. I don't say it. I don't say that I'm old, and I don't say that I'm listening poorly. Of course that when I need help, I ask for it.I always try to read and keep updated with the facts and this helps me to overcome the difficulties of life. The best script is to read and practice what you're reading. The best thing is to always be productive and never sleep during the day. Also not saying to yourself that you're becoming forgotten, because that way you become even more. I never say that I'm ill, I always say: I'm fine. I never say that I'm tired.Don't use negative words. The more you say you're getting tired and forgotten, the more forgotten you become. You start to convince yourself and the others. So be quiet! I know that I still have many years. I know that I'm from the last century, and that I bring with me all ages, but I don't know if I'm old. Do you think I am?I can say that I'm the land and don't wanna be anything else. Daughter of this blessed land of Goiás. I call upon the old aged as myself, or older than me, to exercise their rights. I know that someone will have to bury me, but I won't bury myself.I'm conscient of my authenticity and I search to overcome my personality every single day, setting apart inside of me everything that is old and dead, because struggle is the vibrating word that raises the weak ones and determines the ones who are strong.The important thing is to spread, make millions of smiles of solidarity and friendship. I search to spread optimism and grow seeds of peace and justice. Saying what's in my mind, with hope.I think about what I do, with faith. I do what I should, with love. I struggle to be each day better than the day before, because kindness can also be learned.


Even when everything seems to fall apart, it's up to me to decide between laughing or crying, going or staying, giving up or struggling; because I've discovered, in the uncertain path of life, that the most important thing it's deciding. (Cora Coralina - translated from portuguese by Alice. To read in portuguese, click here)
at February 18, 2012 No comments:

Wilkins Micawber is a fictional character from Charles Dickens's 1850 novel, David Copperfield. He was modelled on Dickens's father, John Dickens, who like Micawber was incarcerated in debtors' prison (the King's Bench Prison) after failing to meet his creditors' demands. (Wikipedia)
at February 03, 2012 No comments: