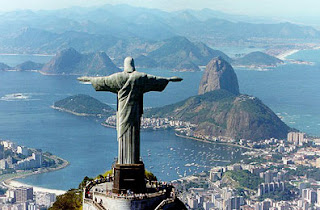 Brazil's Towering Icon
By Kent Garber
Posted November 16, 2007
Gazing down upon bikini-clad sun worshipers along Rio de Janeiro's famed Copacabana Beach as well as the impoverished residents of the city's often violent slums, the imposing statue of Christ the Redeemer is one of the world's best-known landmarks. Completed in 1931, the concrete-and-soapstone statue rises some 12 stories from its base to a height of nearly 2,300 feet atop Mount Corcovado. The site draws about 300,000 tourists a year. Inspiring, yes, but it was not until October 2006 that it became a sacred place. On the statue's 75th anniversary, Rio's Roman Catholic archbishop, Cardinal Eusébio Oscar Scheid, consecrated the small chapel under the statue that now is used for religious ceremonies such as baptisms and marriages.
http://www.usnews.com/articles/news/sacred-places/2007/11/16/brazils-towering-icon.html
at March 30, 2008 No comments: 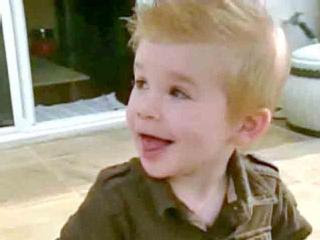 Pay attention to this boy's face. You won't see him on the news. Dallas Hextell has been treated with Stem Cell Transplant, using his own umbilical cord blood.


SACRAMENTO - A little boy diagnosed with cerebral palsy appears to have made a dramatic recovery after a transplant using his own umbilical cord blood, his family says.

Dallas Hextell of Sacramento was diagnosed with cerebral palsy as a baby. According to his parents, he's now doing everything a typical toddler would do, thanks to a stem-cell transplant using his own blood. Cynthia and Derak Hextell conceived in vitro after three years of trying. They said their son was a blessing - but soon after his birth they knew something was wrong. "He would cry for three hours straight like he was in pain," Cynthia said. "He couldn't really focus on things. When he started eating baby food he had chew-trouble, controlling his tongue."

A specialist eventually diagnosed Dallas as having brain damage that impaired his muscle control. Cynthia remembered they had preserved blood from his umbilical cord. "There are a few places in the country that are offering services to store stem cells," said Dr. Steven Lindheim, a fertility specialist from San Diego. "People don't think about having something just in case something goes wrong," he said.

When Dallas was accepted to undergo a potentially life-changing procedure as part of a Duke University clinical trial, his parents jumped at the chance. Dallas's cord blood cells infused intravenously in less than an hour. His mother said just five days later, the child who had never uttered a word said, "Mama, mama." "And of course, him and I started crying, and he grabbed the video camera," Cynthia said.

Once withdrawn, Dallas started waving, laughing and appeared more curious. Doctors said there's no way to prove Dallas' cord blood explains the change, but neither his mom nor dad said they need an explanation. "I see hope. It just makes you believe in miracles," said Cynthia. "I think in the next five to 10 years it'll be standard of care just to have those stem cells in case they're needed," said Lindheim.